You can call it a Dutch Baby, a German Apple Pancake, or, as we do, The Big Pancake. It really doesn’t matter because it won’t last long enough for a name to stick. 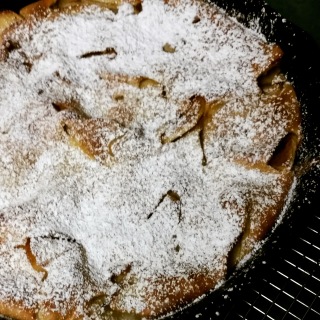 I don’t make this nearly enough*, but that’s about to change. The kid is in LOVE with this thing. I think it’s supposed to serve four people, but that’s just crazy talk, Even with a side of bacon, it’s the perfect amount for two. And, I am willing to bet that the boy could polish off the whole thing on his own. Who am I kidding? I could, too.

I like to make The Big Pancake in my 12″ cast iron pan, but I’m sure any similar sized baking dish would be fine. The nice thing about using cast iron is that it gets nice and hot on the stove and your pancake gets off to a sizzling start. (Just make sure it is well-seasoned and well-oiled – you don’t want to deflate your pancake while you fight to free it.) If you use a baking dish, you’ll just have to saute your apples in a non-stick pan first.

*It’s been nearly a decade since I last made a Big Pancake. The last time I made it, I grabbed the handle of the screaming hot pan and badly burned the palm of my hand. After passing out in the hallway of my condo and spending 5 hours in the emergency room, I swore to never make it again. I have since discovered oven mitts and, after today’s success, I am never not making it again.